Every March, the world comes together to show respect to the leaders, change agents, artists, politicians, athletes, designers, scientists, teachers and more who impact the lives of millions every day. These groups are shaping the way we see the world—it just so happens they are also women. The very idea of this annual celebration was initiated by Congress in 1981, with a request of the President to recognize women’s accomplishments…for a single week. Six years later, the single week became a month—and Women’s History Month was born. We’re joining the celebration this month too, highlighting the impact women have made in our own company, as well as the entire restaurant industry.

The year was 1986. (For those a little challenged by new math like us, that’s 30 years ago!) A little upstart casual dining joint known as Chili’s was still in its infancy. It was the first year the nation celebrated Martin Luther King Jr. Day. Mike Tyson won his first ever boxing title (eleven years before he took a nibble out of Holyfield’s ear). And Lindsay Lohan was born. Whatever happened to that sweet girl from The Parent Trap? But, most importantly, Jadi Oliver began her career with Chili’s. Little did she know that her first job with the brand would bring a long, successful career.  As we celebrate the influential women in the industry this month, it seemed only right to celebrate the thirty year anniversary of one of our own.

I started with Chili’s in Austin, TX in March 1986 as a server. We added Ribs, The Monty, Frisco Salad, and the Mushroom Burger to the menu that year. I transferred to Cupertino, CA in the fall of ’86. It was the first Chili’s in California. It was in a crazy old building that had a giant earthquake column in the middle of the pass-thru. Soon after arriving in CA I was asked to be an Opening Trainer. I was fortunate to be selected to travel all over the United States representing the coolest company in the industry. 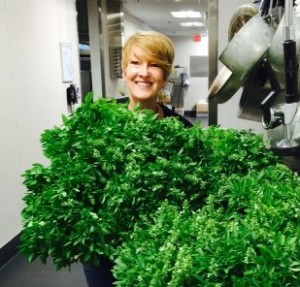 The basil in the photo is last year’s harvest from our garden outside of the Culinary Center. Jadi is working on converting the garden to all edibles.

In 1990, after about 40 openings, I was transferred to the Restaurant Support Center (it was called the Home Office in those days) to coordinate new restaurant openings. Five years later, I moved to the Culinary Department. It was the best move I’ve ever made. I have one of the coolest jobs in the company. Our team works with the chefs from inception of a product through national launch. We create most of the training materials for chefs in our restaurants. I simply love what I do.

For those of you still counting…that’s three decades. Thirty years of impacting a brand and making people feel special. According to the U.S. Labor Bureau, the average tenure for employees in the current workforce is a little over 4 years. But for literally three-quarters of the very existence of our company, Jadi Oliver has been making a difference. Hopefully within the next thirty years, we won’t have to celebrate a month honoring the impact women have made in the world—because by then it will just be the norm. What do you think?

Leveraging Technology in our Restaurants to Serve Up a New Digital Guest Ex...
Scroll to top